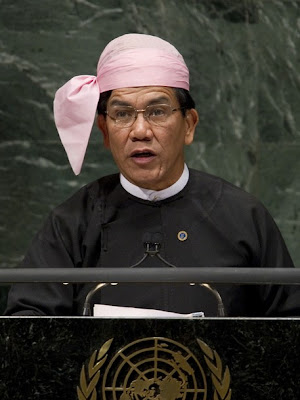 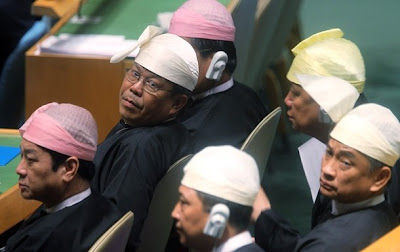 Email ThisBlogThis!Share to TwitterShare to FacebookShare to Pinterest
သတင္း photo

Exclusion of ethnic groups from the coming general election in Burma
will lead to a consolidation of rebellious armed forces along the
border with Thailand to fight against the new military backed
government, an ethnic minority leader said.

"We all know that the election will not benefit us, so we have to
unite to fight against them," said the Karenni National Progressive
Party (KNPP) chief of armed forces, Bee Htoo.

"The election will change nothing in this country. I expect there will
be a major offensive from Burma's military shortly after the
election," he said.

The elected government will claim it is a democratic one but the
suppression of minorities will continue, he said.

The KNPP, one of three rebellious ethnic groups along Burma's border
with Thailand, announced it would continue its armed struggle after
the November election in Burma. The other two groups are the Karen
National Union (KNU) and Shan State Army (SSA).

The Burmese authorities announced last week that about 300 villages
across Kachin, Kayah (Karenni), Karen, Mon and Shan states would be
excluded from the November 7 election because conditions are not in
place for a "free and fair" vote.

The KNPP declared earlier that it rejected the military sponsored
constitution and would not participate in the election, Bee Htoo said.

"The constitution gives most state authority to the military, so I
think it's useless to talk about the election under this charter," Bee
Htoo said in a rare interview with selected Thai journalists recently.

The military junta has no sincere intention to include ethnic
minorities in its political process. No opinion of the minorities was
taken into the 2008 constitution, he said.

"So we see no point in joining such a political process, but the only
option available is the continuation of armed struggle," he said.

The Karenni are coordinating with other armed groups, including the
KNU and SSA.

"We are now working closely together, politically and militarily. I
personally met leaders of the SSA three times this year and we have an
exchange committee with the KNU," Bee Htoo said.

"I think there is no other way but to join hands and units and fight
together. All groups and factions in the groups should know that we
have a common enemy," he said.

The NNPP has fought for autonomy under the Union of Burma since 1957.
Bee Htoo has commanded the party's armed wing, known as the Karenni
Army, of some 1,000 fighters since 1983.
Posted by တုိင္းရင္းသားအသံ Tine Yin Thar Voice No comments:

Than Shwe,in turn, was reported as saying, “Maintaining peace and stability on the border is of utmost importance to both countries,” according to a Reuters report .

Even though, tensions along the border with ceasefire groups are over-sensitive during these days despite SPDC’s first priority is to hold the general elections before year’s end and China’s request to sustain regional stability.

Nonetheless Burma Army’s security forces based in areas surrounding main base of the Shan State Army (SSA)-North’s First Brigade is soaring after the newly promoted regional commander of the Northeastern Region Command, issued orders to tighten security and to secure all pathways to the SSA bases, according to Shan Herald Agency for News (S.H.A.N.).

A new Border Guard Force (BGF) program deadline for the United Wa State Army (UWSA) and National Democratic Alliance Army (NDAA) also known as Mongla group has been scheduled. At an August 20 meeting, the Burmese junta instructed the two ceasefire groups to submit their agreement on transforming into BGF by the first week of September, said Shan Herald News.

On July 30, the UWSA and the NDAA, declined to transform into a junta-run BGF saying no political party contesting in the upcoming general elections will be allowed to come and campaign for votes in areas under their control. A senior Wa officer from Panghsang said the ban includes ethnic Wa parties referring to the Wa Democratic Party (WDP) and Wa National Unity Party (WNUP).

Commander of the Democratic Karen Buddhist Army’s (DKBA) 907 brigade Gen. Saw Lar Pwel also refused to sign up to the junta’s BGF scheme, in an attempt to absorb ethnic soldiers into the Burmese army.

The ceasefire New Mon State Party (NMSP) has also rejected the Border Guard Force (BGF) plan, according to sources close to the NMSP. The NMSP leaders say they will continue their armed struggle until the Mon people obtain their freedom.

The Naypitaw has announced that if ceasefire groups do not respond with an agreement or disagreement on the BGF program, they will automatically be recognized as outlaw groups. But the headquarters of UWSA have said there would be no further response from them. UWSA already sent its latest eight point counterproposals on April 9, but was turned down by the junta.

Anti-BGF program groups are: the UWSA, the MNDAA, Kachin Independent Army (KIA), Shan State Army (SSA) ‘North’’s First Brigade, the Kayan New Land Party (KNLP) and New Mon State Party (NMSP). All decided to remain unchanged unless their autonomy demands are met and they will not also support or participate in the general elections.

However, the junta inflexibly insists the nation must have only one army and that clause has been put in the unfair 2008 constitution which cannot be amended without permission of the armed forces.

“In light of the current political situation in Burma, the armed revolution is still the only practical way to achieve the ultimate goals of Mon national sovereignty and self-determination. Hence, it is extremely essential now for our Mon to develop a greater revolutionary awareness and determination. As long as the rights of ethnic nationalities are not fully guaranteed, Mon armed forces and armed revolution must always be in place to fight for our rights and protect our Mon people. The military regime still refuses to recognize and guarantee the democratic rights and the rights of ethnic nationalities in Burma.”

“We would welcome this government or a new government to begin dialogue according to the original terms of the cease-fire agreement,” the statement said.

June 29 marks the 15 year anniversary of the ceasefire agreement between the military junta and the NMSP. Some NMSP leaders believe the ceasefire agreement will be revoked if the junta uses force against them. The NMSP leaders say they will continue their armed struggle until the Mon people obtain their freedom. The NMSP believes that armed struggle is necessary to restore democracy and federal union in Burma.

The Burmese junta is speeding up plans to impose state security by controlling all the ethnic ceasefire groups in the border areas who are being pressured to provide security along Burma’s border regions ahead of the forthcoming elections. Many political analysts believe the junta is pressuring the ethnic ceasefire groups to become Border Guard Forces to restrict and control their activities.

On the contrary, an alliance of eight armed ethnic groups in Burma known as the National Democratic Front (NDF) has said that it is preparing to defend itself if escalating tensions with the Burmese army result in civil war. The comment comes as the Burmese government piles pressure on ethnic ceasefire groups to transform into Border Guard Forces (BGF).

The country’s two main ceasefire groups, the United Wa State Army (UWSA) and the Kachin Independence Organisation (KIO), are resisting the demands, which could spark widespread fighting, while the New Mon State Party (NMSP) totally rejected the proposal. The eight-member group includes the NMSP, as well as the Karen National Union (KNU).

The Burma’s military regime has announced that if ceasefires groups do not response to regarding the agreement or disagreement on the BGF program, they will automatically be recognized as the outlaw groups.

Than Shwe’s dream of ‘maintaining peace and stability on the border’ may not be in line with the ground situations. His promise to China’s President Hu Jintao seems to be a sham and farce. 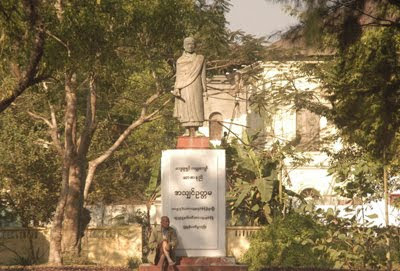 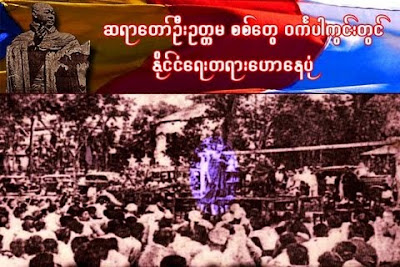 Sept 6 (Reuters) - Myanmar's reclusive leader, General Than Shwe, arrives in China on Tuesday for a five-day state visit ahead of elections on Nov. 7, at which the ruling junta's civilian proxies are expected to score a resounding victory.

Here are five facts about the complex relationship between China and Myanmar:

*In 1949, Burma, as Myanmar was then known, was one of the first countries to recognise the People's Republic of China. But relations soured in the 1960s following anti-Chinese riots in Rangoon (now called Yangon).

* Following a crackdown on pro-democracy protesters in 1988, the West imposed broad sanctions on Myanmar. China stepped into the void, providing aid and weapons and ramping up trade.

Beijing has continued to provide broad diplomatic support for Myanmar's military government, though the ruling generals remain wary of their powerful northern neighbour.

* China has pumped $8.17 billion into Myanmar in the current fiscal year, accounting for two-thirds of its total investment over the past two decades, Myanmar's state media reported last month. [ID:nSGE67F0BL]

Energy projects formed the bulk of the investment, with $5 billion in hydropower and $2.15 billion in the oil and gas sector of the resource-rich nation. However, analysts say official investment data for Myanmar is notoriously unreliable.

Bilateral trade grew by more than one-quarter in 2008 to about $2.63 billion, according to Chinese figures. Chinese firms are also heavily involved in logging in Myanmar.

* Myanmar gives China access to the Indian Ocean, not only for imports of oil and gas and exports from landlocked southwestern Chinese provinces, but also potentially for military bases or listening posts. Two Chinese warships made a port call in Myanmar last month, the Chinese navy's first visit to the country.

* The relationship has had rocky patches of late. In August 2009, refugees flooded across into China following fighting on the Myanmar side of the border between rebels and government troops, angering Beijing. Myanmar has since promised to maintain stability on the border. [ID:nTOE65206V]

အုပ္ခ်ဳပ္ခံရသူမ်ား၏ပူးေပါင္းလုပ္ေဆာင္မွဳမရွိဘဲအင္းအားအၾကီးမားဆုံးသူမ်ားလည္းဘဲအုပ္ခ်ဳပ္လုိ.မရဘူး၊ Even the most powerful cannot rule without the cooper

တုိင္းရင္းသားအသံ
အုပ္ခ်ဳပ္ခံရသူမ်ား၏ပူးေပါင္းလုပ္ေဆာင္မွဳမရွိဘဲအင္းအားအၾကီးမားဆုံးသူမ်ားလည္းဘဲအုပ္ခ်ဳပ္လုိ.မရဘူး၊
Even the most powerful cannot rule without the cooperation of the ruled. 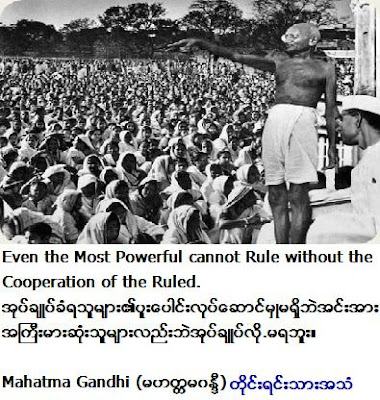 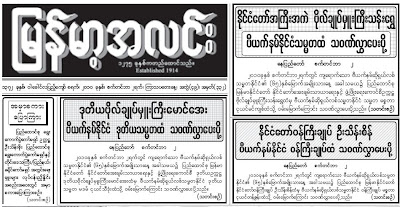 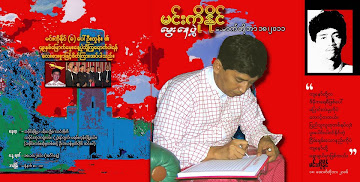 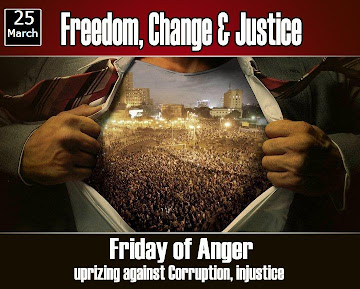 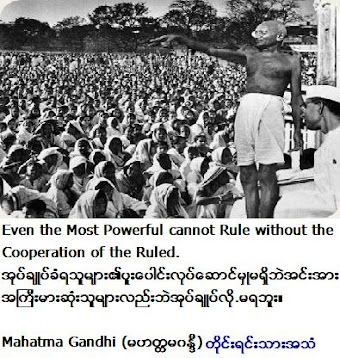 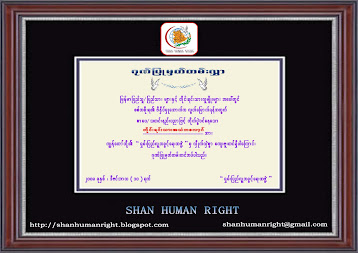 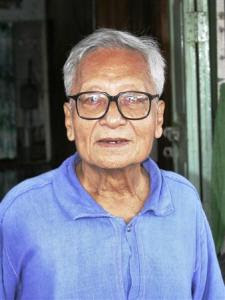 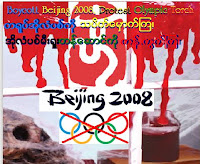